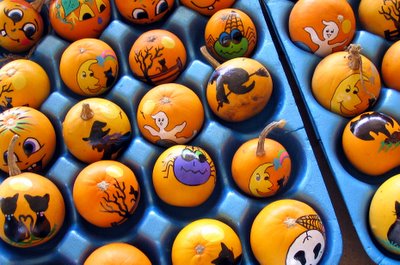 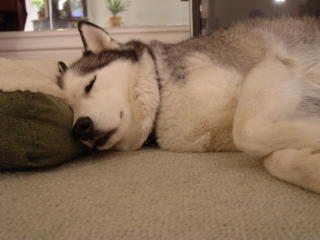 Recently, I purchased an oversized plush bed for my Siberian husky. After a week now, she is still sleeping on the floor. I've tried everything to get her to use this bed: put a few pieces of kibble in the middle of it, refuse food altogether until she goes on it, threaten her with the vet's office on the phone. Nothing has worked. I find her behavior tremendously disturbing. I fear that she has adopted the bed as her own child. I don't want to take the kind of action that would traumatize my dog, i.e. bag the bed and return it to Petco. How should I tell visitors that my dog has difficulty separating fact from fiction?
Posted by Sylvia C. at 10/09/2005 2 comments: Links to this post

The English Major Writes: An Essay on "Come Sail Away" by Styx

Come Sail Away by this band is a mantra about a guy’s first time sailing a majestic cruise liner across the perilous oceanic expanse. The main idea is that this cruise liner is figurative. In other words, the boat is all in the guy’s head. Another important main idea is that our protagonist undergoes all these adventures before he renounces his everyman religion to join an angelic cult.

As I stated in the introduction, the cruise liner is figurative. The way we know that is by investigating the impossible feasibility of the lines. He, the speaker, goes, “I’m sailing away.” And more importantly he goes:

Set an open course for the virgin sea
For I've got to be free
Free to face the life that's ahead of me
On board I'm the captain
So climb aboard
We'll search for tomorrow
On every shore
And I'll try, oh Lord, I'll try
To carry on
I look to the sea
Reflections in the waves spark my memory
Some happy, some sad
I think of childhood friends
And the dreams we had
We lived happily forever
So the story goes
But somehow we missed out
On the pot of gold
But we'll try best that we can to carry on
A gathering of angels appeared above our heads
They sang to us this song of hope and this is what they said
Come sail away
Come sail away
Come sail away with me
I thought that they were angels
But to my surprise
We climbed aboard their starship
And headed for the skies.

As evident, the whole thing is figurative because none of this can be possible. Also, we don’t know who he’s talking to when he beckons someone (who? me? you? us?) to climb aboard, as he is the captain, the skipper of the boat-a-rockin’. The fact that we don’t know who he’s talking to makes us come to no other conclusion than that the boat would sink if you tried to sail it. In other words, it is figurative. The speaker, or, more precisely, the singer also talks about reflections in the waves that spark his memory. It is a known fact that it is impossible for waves to reflect memories, especially because waves move really fast and no one can dictate Mother Nature’s speed. Again, figurative language infiltrating the piece.

Now that we’ve established that the piece is not literal, we can explicate the epic journey condensed in the lyrical piece. First he announces that he is sailing away and says his course is “open,” implying he is not bound by the constrictions of nautical charts, which in turn implies that his sea is indeed “virgin” because no other nautical explorers have “hit it” yet. He is optimistic about his journey, saying that he will “search for tomorrow on every shore,” which is the most poetic line of the whole work, because you can’t really see “tomorrow” as a thing you can spot on the shore with your telescope. No, you have to dream it.

Mystery unraveled. It isn’t until a few lines later that we realize who he’s asking to climb aboard and search for tomorrow: it is Jesus, for God’s sake. So he talks about how he grew up with Jesus and the other kids and had good and bad times. Suddenly, he realizes he missed the pot of gold, which shifts our attention from Jesus to leprechauns galore. Since a lot is lost through oral storytelling tradition, we will never know of the bloody battle of the sailor and the leprechauns, but we do see some deus ex machina in action: angels come to the rescue. We can surely assume that the speaker lost his faith in holiness and shunned the angels, because in the end, he renounces his everyman religion to ascend to a starship, which, by the way, is an underlying message by Styx to say that traveling by boat is out and that the Here and Now is the modern, industrialized society, where we can all travel by plane and retain our spirituality. The cult of modernity is too strong to deny.
Posted by Sylvia C. at 10/08/2005 2 comments: Links to this post

Spammers are relentless with this righteous blog. I swear, it makes a sister not want to blog anymore; that is, until I was spammed by "Enlargement" who had some things to tell me about scrapbooking embellishment:

Interesting blog you have here, I landed here on accident. I was searching for something else and came across your site. I found it pretty interesting and entertaining. I got you book marked.

I will pop back in from time to time to see what you have new here.

That shit really piqued my interest, but, I gotta say, it was that comment about how your site is "just as entertaining and educational" as mine that killed it. Word. Your shit don't even compare. I hope that when you "pop back in from time to time" you see this post and improve your wack site.
Posted by Sylvia C. at 10/04/2005 3 comments: Links to this post