Hi, my name is Alfredo.

Patrick called me last night in the middle of the night where he was. He sounded pretty sober, even as he told me otherwise. I asked if he was about to tell me he loved me because it would be a pretty funny joke. Just then we both went silent. Moments later I realized the awkward silence was the direct result of my dead cell phone battery. The next day I thought it would be funny to send him an email that read, “You are dead to me. Ha! Ha! Also, I don’t like your cigarette habit and you drink too much. Ha! Ha!” I can’t wait to see his response.
Posted by Sylvia C. at 2/23/2007 1 comment: Links to this post

This Blog (and its Author) Talks

Really, no need to thank me for the amusement you get out of this blog. You'll notice I can go a long time without writing anything amusing. When you're amused, I'm probably unhappy, in between jobs, misguided in life (again). When you're not amused, I'm still unhappy, between jobs, and misguided, but I keep posting so as to declare, "I'm enjoying life, I am! I'm enjoying life just enough to keep up with a blog!" When I stop posting altogether, you can be assured I'm busy getting fitted for new pants to wear at my ultra-conservative new job which will boost blog amusement as my own soul deflates, so stay tuned! Same time, same place! Just like work.
Posted by Sylvia C. at 2/19/2007 2 comments: Links to this post 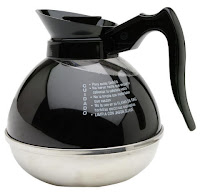 There was, at one of the largest research institutions in North America, an academic library that dangled decrepit elevators in rotting shafts. The top floor housed me and a bunch of old books and maps and a coffee maker whose on/off switch a co-worker of mine claimed she was too weak to traverse a reading room to turn on, therefore causing both of us to settle bitterly for bitter Folgers crystals at our desks most of our embittered days at work. A year after I decided I'd had my last drop of Folgers and quit my job to move back to this shithole Los Angeles, I learned from another library denizen that he was hastened out of his real estate on the basement level to make way for a new barista-equipped coffee house. Hardly expressing much sympathy for him, I was eager to brainstorm with the best and offered these potential names for the new addition: Coffee Rings, Ye Olde Wilson Coffee Shoppe, Basement Beverages, Sober N' Safe Buzz, Hangover Headquarters (or just HQ to save money on signage), Dregs Not Unlike Yourselves, Don't Spill or We'll Charge You Processing Fees to Replace those Periodicals, and Magazines Ain't Coasters. My bitter former co-worker on the top floor came up with the brilliant Undergrounds. Even my basement buddy, who had every reason to resent this coffee house, offered The Incunabula ("The Ink" for short, he adds) to the administrative minds who would ultimately dub the long-awaited coffee palace: Academic Blend. At last! Pour me a sloshing cup of that Academic Blend and let its utterly inspired genius flow over my blunted nerves!
Posted by Sylvia C. at 2/17/2007 3 comments: Links to this post

When the waitress told me I could sit at any table I wanted, I chose the one farthest away from the one with the most children. As I scanned over the menu, I became sad. I noticed that my favorite entree--Tastee Liver N' Chips Platter, Piggy Eater Sized--was discontinued after a mere 2 month appearance on the menu. But I also became sad because I knew that no matter what I did in life, there will always, always, always be children around me.

This is not to say I disdain children. I find it impossible, however, not to turn my nose up at the ones who think howling will draw food closer to their mouths--and the ones who morph into Osh Kosh Cantankerous trolls when strangers, how dare they!, accidentally make eye contact with them. Strangers such as myself prefer much more meaningful experiences like listening for their names to be called by restaurant hostesses than to establish some dull exchange with a self-muting child. Yet these children always seem to think that all adults are interested in cajoling them into smiling or saying something innocently clever (the chances of which are exasperatingly low). Such childish presumption, I stress, should never be rewarded by parental attention! Parents should simply inform their children that the adult has little interest in anything but herself. A cheerful pat on the child's back may follow to ease the child's deserved embarassment.

I was a bit of a troll myself, as you may have guessed. I was also one of these children who did not enjoy children-lovers. I hated answering questions about my teacher's name, what grade I was in, if I did well in school, and if I could tie my shoes all by myself. Even at the tender age of 6, I recognized a lame question when it was posed to me. It was worse when I answered factually, and the children-lovers patronized me further. How unbearable! I couldn't wait to grow up!

As an adult now, I make a conscious effort not to betray Trollish Sylvia by being a silly-toned, dumb-talker-to'er of children. Recently I watched a woman my age ask little Hannah who her teacher was and then lie to the little Hannah by saying that so-and-so was the best teacher around. That day young Hannah equated "best teacher around" with "giver of Ds and Fs on dictation tests". If only Trollish Sylvia fought off Liar Liar Woman-My-Age's Pants on Fire in time. Hannah says your love is whack, lady!
Posted by Sylvia C. at 2/17/2007 No comments: Links to this post

Be Mine Forever and Ever, Will You?

I shrieked when I opened up the envelope you set on my adjustable office chair with the stained lumbar support. I wish you would have given me the entire perforated sheet of Leonardo DiCapprio valentine cards, but I can't be so greedy. I get greedy only when it comes to you. My name's Sylvia, not Slyvia, but you lost only a few minor points from that. Can you get me a job at the student ID kiosk at school?
Posted by Sylvia C. at 2/14/2007 1 comment: Links to this post

Last night I dreamt of tiny white tailed deer that sprouted from the ground. My dog, the brave husky, pounced on them. I got nervous. I almost barfed. Actually, I did, and all the deer scattered. My dog turned into a deer and ran off as well. I am the lonely barfer with nothing to write about today.
Posted by Sylvia C. at 2/14/2007 2 comments: Links to this post

My dog tapped me on the shoulder to wake me this morning, alerting me to her desire to piss in the leafy ground covering that separates my apartment complex from my neighbors'. I got out of bed and my dog led me to the back door. She escaped outside on a short leash, looking for a spot to piss on. I stayed behind. I was unfit for public presentation and half awake. Someone said hi to me, I think. I don't find it appropriate for neighbors to acknowledge folks when they're trying to hide, so I ignored her and hoped she'd learned her lesson. When I was fully awake and my dog content, I decided to wash a couple of loads of stinky clothes. These clothes are made stinky from the damn skunk that lives under the building. But that's another story. I fell asleep while folding the first load of clean clothes. I woke two hours later and found another lady in the laundry room. She had taken my clothes out of the dryer. I apologized. I knew it would be a bit much to explain that I'm usually extraordinarily conscious of these things. She said she wanted to get her stuff clean and get out of there. Later I remembered it was Superbowl Sunday and that she was probably off to a party to get happy. Football makes me lose my appetite.
Posted by Sylvia C. at 2/04/2007 3 comments: Links to this post