I Work with Fools

I'm a big kid now! (That is, I wear underwear-like diapers.)

Thanks to the Write Source, my creative juices flow like mad rhymes! I am now writing at the Grades 4-5 level:

A special secret place: Last year when I was still in the 3rd grade, none of the kids believed that trolls lived down by the creek behind my house. The kids came over to prove me wrong. On the way home, I showed them the scratches on my arm, proving to them that the nasty trolls were indeed alive and living in proximity to my bedroom. A few kids, like Joanne the pony-cat killer, got scared and headed straight home with tears in their eyes. The curious and the brave stayed with me. We got to my house, dropped down our knapsacks and entered the gate to my backyard. A few kids hushed the noisy ones. I said, “Eh, trolls don’t care about noise,” and led them to the creek. When we got to the creek, the kids bunched together, their eyes darting every which way, fearing that a troll would attack from behind. We stood out there for a long time, and no one saw any trolls. The kids left and I felt like such a sham. That evening, I sulked at the dinner table. My mom said, “What’s wrong, Sylvia? Don’t you like your elk steak?” I said, “It’s fine. The kids came over. They didn’t believe that trolls live in the back.” My mom put her hand on my shoulder and said, “I’m sorry, Sylvia, the trolls hurt a baby and were forced to move out of the neighborhood. It’s good for all of us, Sylvia. You’ll learn to accept this in time.”

A song that means a lot to me: Nothing gets me going more than that song that starts, “Blinded by the light. Revved up like a deuce. Another runner in the night.” What is the song about? Anyone know?

My most embarrassing moment: I was sick and tired of the mean kids making fun of me for being so quiet in school. One day, to win over these asswipes and gain their friendship, I targeted another quiet kid in my class. I announced to the rest of the students that this girl fell on her ass playing hopscotch during recess. If only I’d noticed who she was playing hopscotch with while I was sitting by myself on the other side of the yard. Turns out she was the leader of the mean kids, so I got my sewn-on jean pockets ripped off after school.

Talk about being scared!: For Halloween, I went out as Strawberry Shortcake, the girl with the cute red hair and freckles. When I turned the corner on 5th Street, the leader of the mean kids thought I was publicly mocking her, so I got my Strawberry Shortcake mask dented—a lot.

A terrible storm: A terrible storm brewed in the eyes of my teacher after I told her I wasn’t following her math lesson…for the ninth time. Even though I was sincere, she felt I was disruptive and formed a storm in her eyes. Then she cried like torrential rain.

This school really needs . . .to stop using beige paint. The color is so unappetizing that I end up skipping lunch most days. Then I get sent to the nurse’s office because they think I’m sick. More beige. I get so depressed in the nurse’s office that the nurse brings in this woman to talk to me. I cheer up and tell her about caterpillars turning into butterflies. She thinks she has cured me, but it was really her uplifting chartreuse dress that made me excited about school and learning and participating with teacher-types. Was she a teacher? I don’t know, but she should be.

I'm standing in one of the aisles at Trader Joe's over my lunch hour, trying to find a box of the exact kind of tea the receptionist gave me on Friday. That day, the kitchen was out of tea bags, so I thought she'd have one to spare. I was right, but as she handed me her very last tea bag at 4:13 in the afternoon, 47 minutes till the end of the work day, she said, "Will you bring me another tea bag on Monday? It has to be this kind," she pointed at the box before dropping it into the wastebasket. I nodded, "Yeah, okay" and accepted the tea bag, not knowing I had just entered a serious contract. I intended to give her a replacement tea bag, but the weekend was long, and I had nothing to give to her on Monday. She said nothing, so I thought it would be lame of me to bring it up and make her feel stupid. "Hey, about that tea bag...I'll have it for you tomorrow." Tuesday is today, and I was the one who felt stupid because she did ask me for the tea bag. "Did you remember to bring the tea bag?" I looked at her water-filled cup and said, "No, I'm sorry. You don't have any, do you? I'm sorry. I'll go to Trader Joe's on my lunch break and get you some." She said, "No, that's okay. Don't worry about it." But did I believe her? No. It was not okay, and she made me feel it. Anyway, I got back from the grocery store with a slightly nicer version of the tea she had. Same ingredients, only more fragrant. Flavor remains. Antioxidants, the same. I showed her what I'd gotten and she looked at me with a slightly deranged smile--skeptical, but too polite to roll her eyes and sigh. Having picked up on this, I said, "Would you like to try it at least?" She said, "Do I have a choice?" I threw the tea bag on her goddamn keyboard and walked off in a huff.

When things cooled off, I got an email from her, saying, "So, are you going back to the store to exchange these?"
Posted by Sylvia C. at 9/12/2006 No comments: Links to this post 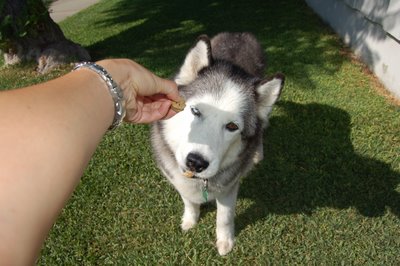 Face it, biotches, you can't handle how cute she is. Yeah, she just signed a record deal and will be promoting the new line of junior fashion at Kohl's. She's also the new sponsor for Nutella because wha? Because she's wholesome. (Photo of some dog eating a biscuit out of some person's hand is provided by Sylvia.)
Posted by Sylvia C. at 9/09/2006 1 comment: Links to this post